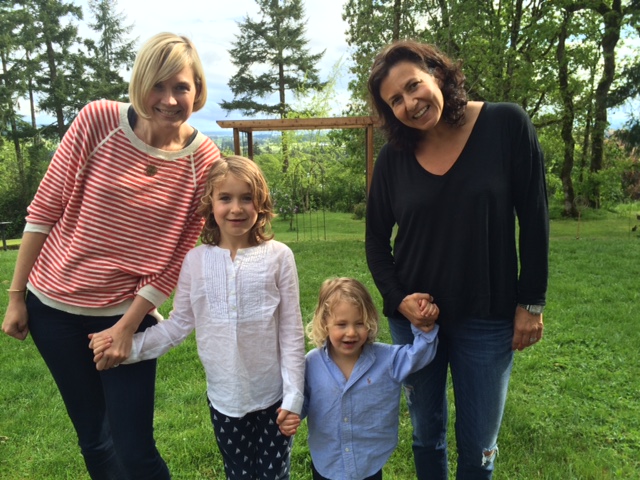 It was long-determined that if we had kids, I would be the one to get pregnant,” explains Cara. “As I approached my mid-thirties, I knew we needed to get started.

Cara and Jen met in 2003 and shared a commitment ceremony in 2006. A year later, they decided to grow their family.

“It was long-determined that if we had kids, I would be the one to get pregnant,” explains Cara. “As I approached my mid-thirties, I knew we needed to get started.”

As attorneys in Portland, Jen and Cara were familiar with ORM Fertility, so they began their journey there. They met with Dr. John Hesla and immediately felt comfortable with him.

“We love him. He was so kind and gentle,” says Cara.

They went through the process of selecting a sperm donor and had a very easy time getting pregnant. The first Intrauterine Insemination (IUI) was successful. Cara and Jen had Katherine in the beginning of 2008. She was a happy, healthy baby.

The couple settled into parenthood and all the changes that come with it, and initially weren’t sure if they wanted a second child. But when Katherine was three, their thoughts came back to growing their family. They had some remaining frozen sperm from the donor they used to conceive Katherine, but learned he had since “retired.” That meant that if Cara and Jen wanted their children to be 100 percent genetically related, they had limited opportunities with the remaining sperm.

“As we watched Katherine grow, it became increasingly important to us that our kids be from the same donor. Honestly, it wasn’t important to us at first, but we realized that it would be great if our two children were the same genetically,” says Cara.

Since things went so smoothly the first time, Jen and Cara assumed they would have an easy time conceiving again. But the first IUI attempt didn’t work. Neither did the second, third or fourth. Working with Dr. Hesla, Jen and Cara knew they only had one more chance because they were running out of sperm. Dr. Hesla recommended that Cara do in-vitro fertilization to increase the probability of success.

“IVF is an odd process — lots of medicines and needles. We ended up having to freeze the embryos instead of doing a live transfer. But we also had the opportunity to have genetic testing done on the embryos to learn which were the healthiest.”

Four of the five embryos tested healthy and viable. Since this was 2012, genetic testing was very advanced, allowing Jen and Cara to know a lot about their embryos, including their gender.

We told Dr. Hesla we didn’t want the embryologist to know that we already had a girl because if they did, they might be predisposed to select a male embryo. We just wanted the healthiest embryo possible.

Dr. Hesla did know the gender of the baby and Cara and Jen asked him to write it on a piece of paper. They wanted to wait to look at it when Cara was through her first trimester. Cara gets emotional telling the story of how they learned their baby’s gender.

“Katherine was only three at the time. We asked her to open the envelope and because she couldn’t read yet, we asked her to just read the letters. She said B-O-Y! We were so excited. We told Katherine that she was going to have a baby brother and she understood. That was a really defining moment for us.”

Baby William was born in the summer of 2012.

Today, Cara and Jen are thankful to ORM, and specifically Dr. Hesla.

“He explained everything as we went along, including the benefits of genetic testing. We couldn’t have the wonderful family that we do today without him. He is just a great doctor and human being!”

Cara and Jen first became patients at ORM Fertility and pursued IUI with donor sperm. Their first IUI was successful and Cara carried the pregnancy.

After their daughter, Katherine, was three, Cara and Jen started discussing growing their family. They came back to ORM and met with Dr. Hesla. After a few unsuccessful IUI attempts, they discussed their treatment plan with Dr. Hesla and decided to pursue IVF.

Cara underwent an egg retrieval and embryos were created using the remaining donor sperm. Cara and Jen decided to pursue genetic testing to determine the healthiest embryo to transfer. A healthy embryo was selected and Cara carried the pregnancy. Their son, William, was born in the summer of 2012.